The people of the Six Nations, also known by the French term, Iroquois Confederacy, call themselves the Hau de no sau nee (ho dee noe sho nee) or People of the Longhouse. Located in the northeastern region of North America, originally the Six Nations were five and included the Mohawks, Oneidas, Onondagas, Cayugas, and Senecas. The sixth nation, the Tuscaroras, migrated into Iroquois country in the early eighteenth century. Together these peoples comprise the oldest living participatorydemocracy on earth. Their story, and governance truly based on the consent of the governed, contains a great deal of life-promoting intelligence for those of us not familiar with this area of American history. The original United States representative democracy, fashioned by such central authors as Benjamin Franklin and Thomas Jefferson, drew much inspiration from this confederacy of nations. In our present day, we can benefit immensely, in our quest to establish a new a government truly dedicated to all life's liberty and happiness much as has been practiced by the Six Nations for over 800 hundred years. 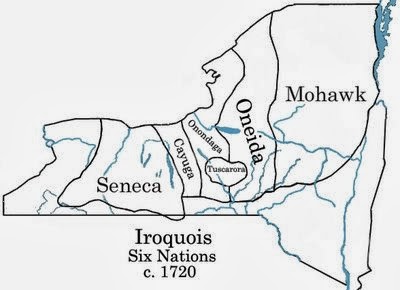 On June 11, 1776 while the question of independence was being debated, the visiting Iroquois chiefs were formally invited into the meeting hall of the Continental Congress. There a speech was delivered, in which they were addressed as "Brothers" and told of the delegates' wish that the "friendship" between them would "continue as long as the sun shall shine" and the "waters run." The speech also expressed the hope that the new Americans and the Iroquois act "as one people, and have but one heart."  After this speech, an Onondaga chief requested permission to give Hancock an Indian name. The Congress graciously consented, and so the president was renamed "Karanduawn, or the Great Tree." With the Iroquois chiefs inside the halls of Congress on the eve of American Independence, the impact of Iroquois ideas on the founders is unmistakable. History is indebted to Charles Thomson, an adopted Delaware, whose knowledge of and respect for American Indians is reflected in the attention that he gave to this ceremony in the records of the Continental Congress.

from Exemplar of Liberty, Native America and the Evolution of Democracy,
Chp.8, "A New Chapter, Images of native America in the writings of Franklin, Jefferson, and Paine"

We have 981 guests and no members online