Greetings from San Francisco and the 2010 Global Forum on Modern Direct Democracy. 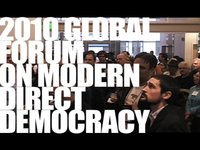 We are from all corners of the world and from all walks of life.

We are members of dozens of political parties - a truly transpartisan group.

We, more than 400 people from all continents, have met for five nights and five days to discuss direct democracy at a forum that was free and open to anyone in the world who wished to attend.

We considered more than 200 ideas, suggestions and principles related to direct democracy that were offered by those in attendance. We debated these ideas. And we measured our opinions on these ideas using advanced polling technology. The ideas and principles that attracted the most support were compiled and then considered by a committee charged with expressing the consensus of our gathering.

Here is our statement:

"Modern Direct democracy is one important way to bring the people into representative government at all levels -- local, state, national, and transnational. It is a process that works best in places where freedom and human rights are protected. To improve direct democracy, we must continue to learn from each other, bridging boundaries of nationality, ideology and party.

Having gathered here in San Francisco, we also must note that California's initiative process needs greater attention and perhaps improvement, because the reputation of the state's direct democracy is negatively and unfairly affecting perceptions of direct democracy around the world.

We agree that three values must be applied to direct democracy everywhere: transparency, open access, and deliberation.

1. Transparency: At every stage of each direct democratic action, and in every aspect of the initiative and referendum process, citizens have a right to know as much as possible about the people and money behind each measure, so long as individuals are protected against coercion and retribution for their votes and for their signatures.

2. Open access. Access to the process, especially the qualification of measures for ballots, should be based on measures of substantial popular support - and should not be dependent on money or on the sanction or approval of public officials or political parties or interest groups. Technology and other innovations should be fully incorporated into the process consistent with the values of expanding access and ensuring transparency.

3. Deliberation. A deliberative process that is driven by and managed by citizens themselves should be part of every direct democracy. We believe that the most important factors in eliberation are the ability to hear multiple views from all sides - and the time to consider each direct democratic measure fully.

We cannot stress enough the importance of sufficient time to the health of direct democracy. We are concerned that many direct democratic systems, particularly those in the United States, fail to provide the time necessary for thorough deliberation and open access.

We debated dozens of other ideas on which there was a wide range of opinion. We did not include those ideas in this document, but they may be found on the forum web site, www.2010globalforum.com.

We see this statement, the San Francisco Declaration on Direct Democracy, as a first draft of global guidelines for best practice in initiative and referendum. We welcome the suggestions, corrections, and contributions of the world".

The tools of modern direct democracy, such as the citizens' initiative and referendum process, have spread over the world. In more than 100 countries globally citizens are today no longer limited to just electing representatives but are also involved in agenda-setting and decisiomaking on substantive issues. However, these instruments do not always work in a userfriendly and efficient way, nor are they always institutionalized in an integrated and balanced way in order to make representative democracy truly representative. For this reason, thinktanks, academic institutions, activist groups and professional organizations have teamed up to map the instruments at hand and develop global recommendations for well-designed direct-democratic tools.

Since 2008 the Global Forum on Modern Direct Democracy has established a unique quality network of activist professionals from governmental and non-governmental organizations with one common goal: bringing democracy forward! The process is coordinated and co-hosted by the Initiative and Referendum Institute Europe (www.iri-europe.org)