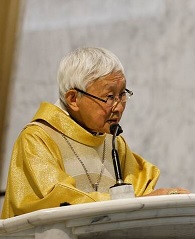 The 90-year-old cardinal was detained May 11 under China’s national security law for “conspiracy to collude with foreign forces,” but he has not been charged with that. Instead, he and the four others were charged with failing to properly register the 612 Humanitarian Relief Fund, set up to offer financial assistance to those involved in anti-government protests in 2019. It was disbanded last year after coming under scrutiny by authorities.

The May 24 court hearing coincided with the feasts of Our Lady of Sheshan and Mary Help of Christians, a date marked by Catholics to pray for the church in China. Later that evening, Cardinal Zen celebrated Mass for the feast (photo).

All five defendants pleaded not guilty. If convicted of the improper registration, each defendant ...

We have 515 guests and no members online