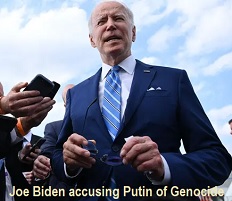 Washington DC, Apr.12.– Joe Biden has accused Russia of carrying out genocide in Ukraine, saying that Vladimir Putin is “trying to wipe out the idea of even being Ukrainian”.

Biden has been consistently outspoken in denouncing Russian wholesale killing of Ukrainian civilians, labeling Putin as a “war criminal” in mid-March. Multiple investigations are underway into Russian atrocities in Ukraine, which include the razing of Mariupol and the executions of civilians in the Kyiv suburb of Bucha.

The prosecutor at the international criminal court in the Hague opened a case in February saying there was “a reasonable basis to believe that both alleged war crimes and crimes against humanity have been committed in Ukraine”.

Proving a case under the 1948 Genocide Convention requires an “intent [by the accused] to destroy, in whole or in part, a national, ethnical, racial or religious group”.
(...)

We have 1160 guests and no members online