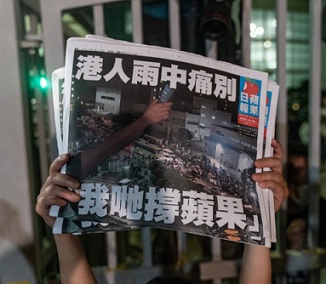 Apple Daly closed by Chinese authorities Hong Kong, July 11.– The United States and 20 other countries have issued a joint statement expressing concern about the current and future outlook of press freedom in Hong Kong.

The group of 21 governments—part of the “Media Freedom Coalition” that was established in 2019 to advocate for press freedom and the safety of journalists—pointed to the recent forced closure of Apple Daily, a major pro-democracy newspaper in Hong Kong, and the arrest of the paper’s staff.

“The use of the National Security Law to suppress journalism is a serious and negative step which undermines Hong Kong’s high degree of autonomy and the rights and freedoms of people in Hong Kong, as provided for in the Hong Kong Basic Law and the Sino-British Joint Declaration,” the July 10 statement reads. [ Full text ]

Freedoms in the financial hub have been disappearing at an alarming rate after the Chinese Communist Party’s (CCP) imposition of its draconian national security law last summer. Since then, dozens of the city’s pro-democracy opposition leaders are now either facing prosecution or sitting in jail, if they haven’t already fled overseas as political refugees.
(...)

Liberty is not the power of doing what we like, but the right of being able to do what we ought.

We have 960 guests and no members online