Taipei, Mar.3.– The Chinese Communist Party has kept up its broad attack on faith amid 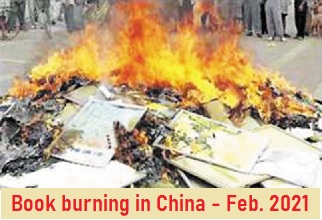 At least 100 million people—or about a third of believers in China—faced “high” or “very high” levels of persecution in 2017, according to estimates by the human rights advocacy group Freedom House estimated. Their plight has continued to worsen, the group found last year.

For the believers—Tibetan Buddhists, Christians, Uyghur Muslims, or Falun Gong practitioners—reading, printing, or distributing religious materials could lead to jail terms, harsh labor, and other forms of abuse. Many are subject to routine monitoring and harassment by state agents, who often raid their homes without warning to seize and destroy their books.
(...)

back to top
Tweet
THE MOST IMPORTANT THING ABOUT EDUCATION IS APPETITE.
Winston Churchill