St. Louis, July 1.– On a blistering June 27 in St. Louis, Mo. forces of good and evil clashed at the feet of a majestic statue of the city’s patron. Fueled by emotion over substance, around 150 Black Lives Matters (BLM) proponents cried obscene slogans to a tribal drumbeat demanding that the 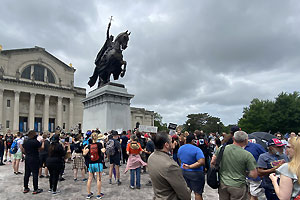 statue be torn down, despite its iconic status. Indeed, the statue is formally named: “The Apotheosis of Saint Louis.”

In the face of this, around 50 faithful Catholics arrived at noontime, to pray the rosary in unison, beseeching heaven to maintain the statue and thus, defend St. Louis’ Catholic heritage. Six or seven priests were among the faithful. The contrast between the two groups was razor-sharp.

While those in favor of the statue were content to pray peacefully and keep to themselves, they were victims of a continual barrage of insults, provocations and profanity. Almost immediately, the anti-Catholic bigotry of the BLM protesters became clear, as they shouted prejudiced slogans directly into the ears of the prayer warriors. These included: “Your God can’t hear you,” “Your Church is a ring of pedophiles,” and “Your prayers are racist.” Even worse, one of the priests present was repeatedly spat upon.

Their intentions were clearly to provoke the Catholics. This was evident by their actions, which included putting their hands and signs in the faces of those praying and even blowing a deafening air horn directly into their ears.
(...)