Seoul, Dec. 6.– The International Criminal Court said Thursday that it has no jurisdiction 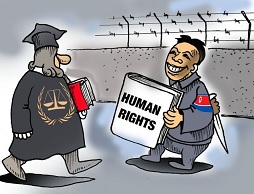 In 2016, leaders of nongovernmental organizations NK Watch and Lawyers for Human Rights and Unification of Korea filed a complaint against Kim with the ICC, holding him responsible for human rights violations in the North.

ICC prosecutor Fatou Bensouda said in its annual Report on Preliminary Examination Activities issued Thursday that the alleged crimes referred to the ICC were neither committed on the territory of an ICC member state nor by a national of a member state, nor has the United Nations Security Council referred the situation in question.

The complainants had said that although North Korea is not an ICC member state, the ICC may exercise jurisdiction over its leader, given that under South Korean domestic law, he may be considered a national of South Korea.