To celebrate the 500th anniversary of the founding of the city of Havana, the King and Queen of Spain will make a historic visit to Cuba from November 12 to 14. They will celebrate the occasion with the regime that has for decades sequestered the sovereignty of the Cuban people, committed crimes against them, and unleashed violence against many other nations. 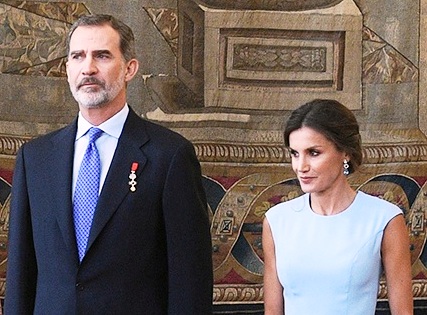 Foto: SS.MM. el Rey Felipe y la Reina Letizia de España. Derivative work, original source: Ministry of the Presidency. Government of Spain The royals will visit San Juan Hill in Santiago de Cuba to honor the Spaniards fallen in the Spanish-American War of 1898. However, missing in their official program is any act of remembrance for the 71 Cubans shot there on January 12, 1959 by direct order of Raúl Castro, Cuba’s current “Maximum Leader.”

Just days after General Batista fled the country and the "revolution" came to power on January 1st 1959, members of the military and police who had served under the Batista regime were arrested and subjected to a summary kangaroo mass "trial" without defense lawyers. They were then taken in trucks to San Juan Hill, lined up in pairs, and shot in front of a newly dug pit. They left loved ones devastated and many orphans. The massacre was ordered to sow terror in Cuba.

See the testimony (in Spanish) of Father Chabebe, who witnessed the massacre.

King Felipe and Queen Leticia’s program of activities is also missing a ceremony to honor the Spanish victims of the Cuban dictatorship. Below we remember some of them.

Andrés Marrero Delgado, 60 years old, was killed by the political police August 11, 1965 at State Security Headquarters Villa Marista, Havana, presumably from beatings. He had a heart condition and his body had evidence of blows to the head.

Rogelio González Corzo, 29 years old, was executed April 20, 1961 at La Cabaña prison, Havana, accused of conspiring against the Castro regime. He was an agronomist and leader of the Catholic Youth.

José Ramón Gonzalo Teja, “the Spaniard,” 68 years old, was shot dead by militiamen on March 8, 1963 at his family farm. The small farmer had two sons who had joined the armed resistance against the confiscation of their land by socialist decree (both died in combat). After his death, his wife was imprisoned for 30 months and the family was evicted from the area and all their belongings confiscated.

Miguel Manteira Marcelino was killed by prison guards of the Isla de Pinos prison on November 19, 1961. He was attacked with rifle butts and bayonets and died of his injuries three days later.

Manuel Paradela Gomez, age 44, wasexecuted June 1, 1964 in Camaguey. He was a civic leader and owned a truck company. Arrested with two fellow conspirators, they were accused of counterrevolution and espionage and taken directly from their summary trial to their execution.

Antonio Ruíz Fusté committed suicide in 1960 in Havana when he saw his lifetime business confiscated by the government.

Manuel Vázquez, “el galleguito,” 22, was executed April 16, 1963 in Santa Clara, Las Villas. He had been a Sergeant in the Rebel Army against the Batista dictatorship and in 1961 had risen against the Castro regime. He sought treatment for a battle injury at a clandestine clinic, where he was arrested by State Security agents and executed.

Some Spanish-Cubans who had joined the resistance against the Castro dictatorship and fell in combat in Las Villas province:

See more details of the above cases in database.CubaArchive.org