A+ A A-
View Comments

Aleppo, Nov. 17 (DP.net).– Under the boot of a cruel dictator, persecuted by Islamic extremists and terrorists bent on eradicating every vestige of Christianity in Syria, the Franciscan

One of many churches destroyed by the war and terrorismmissionaries stoically and heroically persist in their charitable mission in such an inhospitable environment. Nevertheless, they are not limited to extending a brotherly hand to Christians but also to Muslims and to those dispossessed of any other religion who have fallen into utter misery as a result of the war and terrorism.

Over the last four years, over 250,000 people have lost their lives in Syria. The drama of this war-torn country plays out on the evening news in front of our eyes: families try to escape from the war, from the bombs, from terror… But, the poorest among them cannot get away. Franciscan friars who live in the Syrian missions remain close to those who are left behind, to live in the ruins of their cities, in the midst of this unending war. These friars have stayed behind and continue to serve the refugees.

• Providing ongoing emergency funds to the people in Syria and Iraq
• Supporting 29 parishes, 4 homes for orphans and 3 academic institutions
• Operating 16 schools for more than 10,000 pre-K through grade 12 students
• Relocating and providing homes to Christian families
• Rehabilitating destroyed homes for Christians families
• Supporting more than 100 men preparing to be priests or brothers
• Assisting Syrian and Iraqi refugee families in Jordan and Lebanon by helping to pay for rent, food, heat, schooling and transportation. 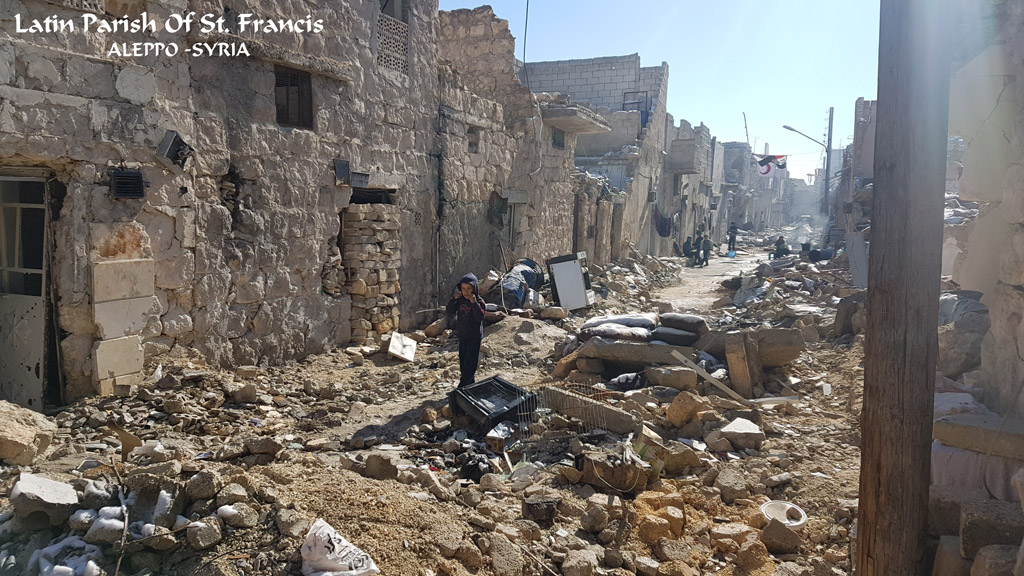 From the Franciscan emergency center, some 6000 destitute families receive a monthly food package and vouchers to buy the many medicines that they need. They also get clothes, detergents, hygiene products, diapers, and powdered milk for children.

During the bloodiest period of the war, many people fled the fighting and converged in Damascus, the capital. In 2017 the was has reached the outskirts of this ancient city. For months, the fighting between the jihadists, rebels, and the government army was extremely violent. Russian and Syrian planes were bombing, indiscriminately, even in highly populated areas. There are no more bombings in Damascus today, but the crisis is not over. The poverty and absence of basic necessities have literally brought the city to its knees.

Facing this tragedy, the Franciscans established another emergency center at the Franciscan friary of Bab Touma, in Damascus. It is nowadays aiding hundreds of additional needy families.

Latakia es the most important port city of Syria and has a population of around 300,000 inhabitants. Since the start of the war, many refugees from other cities fled to Latakia to escape the bombing and abuses by extremists.

To cope with this city refugee emergency, the missionaries created another emergency center that regularly distributes food and medicines and provides medical care and housing. The cost per month for each family is only about US$12-15, but the cost is very heavy because the friars are supporting thousands of families each month!

The generous souls who can and wish to offer donations to help such great work, can call 1-262 534-5470 or write to This email address is being protected from spambots. You need JavaScript enabled to view it. for information. You may also go to www.franciscanmissions.org to offer your contribution.

back to top
I fear the day technology will surpass our human interactions. The world will have a generation of idiots.
Albert Einstein

We have 725 guests and no members online