Bangkok, Mar. 2.─ The government in Thailand will not be looking forward to June, when America's State Department releases its annual report on the trafficking of humans. As in recent years, Thailand's section will make for nasty reading. It will, yet again, prove to be an embarrassment for America's oldest ally in the region.

The country likes to think of itself as a civilised and sophisticated society. But according to the State Department, when it comes to problems of illegal immigration and forced labour, Thailand is on a par with Afghanistan, Chad, Iraq and Niger. Thailand sits on the "Tier 2 Watch List", a notch above the worst of the worst. If it slips down this year, as it might, it will join a rogue's gallery including Eritrea, Sudan, Syria and Zimbabwe. If America's usual procedures were followed, relegation would trigger sanctions against Thailand, including the blocking of relations with the IMF and the World Bank. That almost certainly will not happen—Thailand's goodwill is too important to America. But that the possibility even exists is extraordinary enough. 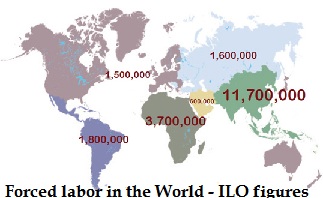 The Thai government has long overlooked abuses. About 2 million legal immigrants and perhaps as many illegal ones keep several labour-intensive parts of the Thai economy afloat. Most of the immigrants are from neighbouring Myanmar; others are from Bangladesh, Cambodia, Laos, the Philippines and further afield. Undocumented workers are particularly vulnerable to exploitation. Smuggled into the country by unscrupulous brokers, they are sold into factory and other low-end jobs in ways that can amount to debt bondage.

The shrimp industry has come under particular scrutiny. It is worth about $1 billion a year to the Thai economy. In the cavernous shrimp-peeling sheds in Samut Sakhon province south of Bangkok, observers have documented instances of workers suffering physical abuse, remaining unpaid and having their papers confiscated. In last year's report on human trafficking, the State Department asserted that in Samut Sakhon, nearly three-fifths of workers "experience conditions of forced labour".

At sea, in the shrimping fleets, it is even worse. Sompong Srakaew of the Labour Rights Promotion Network Foundation, an NGO, says that young Burmese often need to work for six months in order to pay off a bond to the broker who smuggled them in. Some are forced to stay at sea for several years. When the ships put into port, brokers patrol the quays to ensure that crews stay on the boats ...