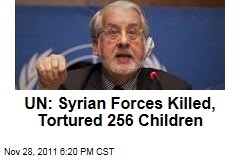 Beirut, Nov.28 (AP).─ A U.N. investigation concluded Monday that Syrian forces committed crimes against humanity by killing and torturing hundreds of children, including a 2-year-old girl reportedly shot to death so she wouldn't grow up to be a demonstrator.

The inquiry added to mounting international pressure on President Bashar Assad, a day after the Arab League approved sweeping sanctions to push his embattled regime to end the violence. Syria's foreign minister called the Arab move "a declaration of economic war" and warned of retaliation.

The report by a U.N. Human Rights Council panel found that at least 256 children were killed by government forces between mid-March and early November, some of them tortured to death.

"Torture was applied equally to adults and children," said the assessment, released in Geneva. "Numerous testimonies indicated that boys were subjected to sexual torture in places of detention in front of adult men."

The U.N. defines a child as anyone under the age of 18. The report was compiled by a panel of independent experts who were not allowed into Syria. However, the commission interviewed 223 victims and witnesses, including defectors from Syria's military and security forces.

The panel said government forces were given "shoot to kill" orders to crush demonstrations ...

We have 737 guests and no members online