Torture is one of the most horrendous ways of violating human rights that 21st Century Socialist dictatorships use to indefinitely hold on to power. Notorious facts, international reports, and the free press prove that regimes from Cuba, Venezuela, Bolivia, and Nicaragua apply torture in order to institutionalize fear. This is a criminal methodology that still remains unpunished. It is promoted and protected by Castrochavism and is overlooked by far too many democratic governments.

The United Nations Declaration against Torture, approved by the General Assembly on 9 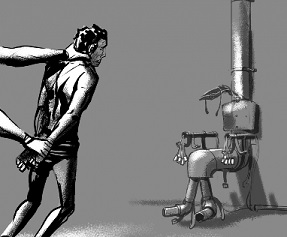 The Interamerican Convention to Prevent and Punish Torture of 12 September of 1985, signed and ratified by Venezuela, Bolivia, and Nicaragua states that for the purposes of this Convention it shall be understood that “torture is the use of methods upon a person intended to obliterate the personality of the victim or to diminish his physical or mental capacities. . .”.

The Rome Statute of the International Criminal Court, adopted on 17 July of 1989, establishes in its Article 7 that “for purposes of the present Statute, it shall be understood as a CRIME AGAINST HUMANITY any of the following acts. . :f) TORTURE. . .”

Through a declaration to RTV Martí, Luis Manuel Otero Alcántara -at that time in a hunger strike- the San Isidro Movement denounced (in April of 2021) that Cuba is a “huge center of torture”. In an interview with journalist Luis Valdés C, the very same Otero Alcántara -now a political prisoner of the dictatorship- denounced “torture at the Calixto Garcia Hospital”. With the massive protests for freedom starting on 11 July 2021, the practice of torture is recurrent.

The Cuban human rights’ watch-group has issued reports on tortured political prisoners, asking for individualized punishments. Journalist Yoe Suarez, in his report “Oven-Patrol, a Cuban Unnoticed Torture” shows that the Cuban dictatorship “has specialized in a method of torture that leaves serious physical sequels and in some cases ends up psychologically degrading members of the opposition and activists”.

In January of 2020, ABC International titled one of its reports “Cubans introduce in Venezuela their methods of torture to make them crueler”. In September of 2020, INFOBAE published maps and photographs of torture centers in Venezuela, reporting on the United Nations’ Mission tasked to investigate human rights violations in Venezuela which “documented 33 cases (21 men and 12 women) victims of arbitrary detention and torture”.

Amnesty International proved that “Lieutenant Commander Rafael Acosta Arévalo was tortured while detained, to the point of dying in front of a judge in June of 2019”. In January of 2019, the Venezuelan Criminal Forum and Human Rights Watch publicly revealed the “detention and torture of dozens of military” and “the arrest and torture of relatives of arrested military”. The case of Commander Luis de la Sotta, imprisoned since 2017 and repeatedly tortured, is amply documented by Defenders of Imprisoned Military in Venezuela”.

In Bolivia, since Evo Morales installed his regime in 2006, the Cuban torture system was introduced and repression was judicialized with the resultant political prisoners and exiles. One of its notorious victims was General Gary Prado Salmón who, as a Captain, captured Che Guevara and was falsely accused, arrested, and despite his being disabled and confined to a wheelchair was subjected to ill-treatment and torture. Today, there is proof that former president Jeanine Añez, civic leader Marco Antonio Tonchi Bascopé, military and policemen are tortured.

The United States Department of State in its 2020 report on Human Rights identified Cuba, Venezuela, and Nicaragua and “voiced concern for the torture and extra-judicial summary executions that were perpetrated in those countries”.

**Attorney & Political Scientist. Director of the Interamerican Institute for Democracy.

We have 349 guests and no members online