It is also the gravest example of a worldwide attack on human rights. 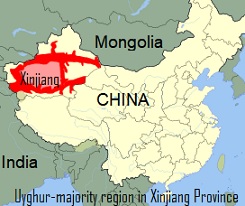 Oct. 17.– The first stories from Xinjiang were hard to believe. Surely the Chinese government was not running a gulag for Muslims? Surely Uyghurs were not being branded “extremists” and locked up simply for praying in public or growing long beards? Yet, as we report in this week’s China section (see article), the evidence of a campaign against the Uyghurs at home and abroad becomes more shocking with each scouring of the satellite evidence, each leak of official documents and each survivor’s pitiful account.

In 2018 the government pivoted from denying the camps’ existence to calling them “vocational education and training centres”—a kindly effort to help backward people gain marketable skills. The world should instead heed Uyghur victims of China’s coercive indoctrination. Month after month, inmates say, they are drilled to renounce extremism and put their faith in “Xi Jinping Thought” rather than the Koran. One told us that guards ask prisoners if there is a God, and beat those who say there is. And the camps are only part of a vast system of social control.

China’s 12m Uyghurs are a small, disaffected minority. Their Turkic language is distant from Chinese. They are mostly Muslim. A tiny handful have carried out terrorist attacks, including a bombing in a market in 2014 that left 43 people dead. No terrorist incidents have occurred since 2017: proof, the government says, that tighter security and anti-extremism classes have made Xinjiang safe again. That is one way of putting it. Another is that, rather than catching the violent few, the government has in effect put all Uyghurs into an open-air prison. The aim appears to be to crush the spirit of an entire people.

Even those outside the camps have to attend indoctrination sessions. Any who fail to gush about China’s president risk internment. Families must watch other families, and report suspicious behaviour. New evidence suggests that hundreds of thousands of Uyghur children may have been separated from one or both detained parents. Many of these temporary orphans are in boarding schools, where they are punished for speaking their own language ...