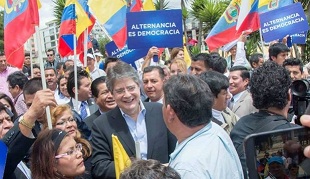 Quito, Nov. 16.─ Ecuadorians have not been gentle to leaders who seek to prolong their hold on power beyond what the constitution allows. Past presidents who tried have been shot or even hacked to death by angry citizens (though not since 1912). Rafael Correa, the leader today, runs no such risk with his attempt to change the constitution to allow him to run again when his term expires in 2017. But he has galvanised the opposition.

On November 6th a coalition of centrist and conservative parties launched a drive to collect the 584,000 signatures needed to force a referendum on Mr Correa’s plan to eliminate term limits for elected politicians. Although Mr Correa, a left-wing populist, is personally popular, polls show that a large majority of voters want the referendum to go ahead. It may be the opposition’s best chance to unseat him.

Mr Correa’s foes have long suspected that he would try to stay in power indefinitely, following the lead of authoritarian allies like Venezuela’s Hugo Chávez, who died in office in 2013. He has denied this, but seemed to change his mind as it became clear that Alianza PAIS (AP), his political movement, may not be able to carry on his “unstoppable revolution” without him. In local elections in February the AP’s candidates lost in the large cities. Ecuador faces a “conservative restoration” if his movement falters, Mr Correa warns. Eliminating term limits would be a “lesser evil”.

The coalition fighting him is a ramshackle grouping of 40-odd parties and other groups. The campaign, financed mainly by business, will collect some 2m signatures—representing nearly a fifth of voters—predicts César Montúfar, a centrist former legislator ...