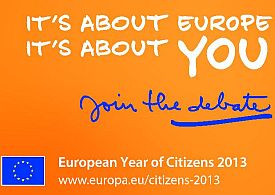 Riga, May 8.─ The EU Ombudsman's office is at the very heart of connecting the European Union with its citizens; this is ever more important in 2013 as the European Year of Citizens.

European Ombudsman, Mr. Diamandouros is fulfilling his mandate with a lot of energy and high professionalism, which has earned him a lot of trust of citizens in this important office and with it in the EU. He has truly been giving the citizens a voice and defending their interest, when necessary.

Important that this event was supported by the European Parliament, an institution, which is directly elected by the citizens of the EU and powerfully articulates their concerns, wishes and hopes. The PETI Committee has earned in this context a lot of trust as the Committee, where citizens can send their petitions and expect a thorough, powerful follow-up.

Maroš Šefčovič, Vice-President of the European Commission responsible for Institutional relations and Administration delivered a speech at the seminar titled "A million voices make a difference: the power of the European Citizens' Initiative". Below followed some extracts from the Commissioner's speech.

The Lisbon Treaty (2009) has introduced into the EU decision-making a new "instrument": the citizen's initiative. This European Citizens' Initiative (ECI) gives citizens a greater role in the European policies, connecting more effectively the EU institutions with more than 500m people in the continent.

That's why it's so important that 2013 has been designated by the EU as the European Year of Citizens; this is to specify the concept and ideas of this year concerning citizens' rights.

Important as well is that European citizens are celebrating in 2013 an occasion when –for the first time they will have a direct opportunity to influence EU policymaking as the first European Citizens' Initiatives reach their conclusion.

On 1 April 2012 the ECI was made valid (through the Lisbon Treaty) and a first experiment in trans-national participatory democracy was launched ...