Organizers of a "Floyd 4 Floyd" rally voiced their desire to eliminate Confederate statues. The Floyd County Board of Supervisors is discussing putting the matter to a November referendum 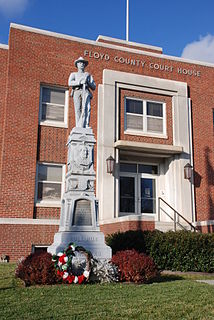 Floyd, Jul 17.– The Floyd County Board of Supervisors will soon decide whether to put the status of the courthouse Confederate monument to a November referendum — as the county Electoral Board warns of potential voter intimidation while a majority recently spoke in favor of preserving the statue.

Every parking spot was occupied at the county Administration building Tuesday morning and residents crowded into the lobby prior to the supervisors’ meeting.

After taking no action at that meeting, the clock is ticking on the supervisors, who must file a ballot request with the circuit court by Aug. 14.

Prior to opening this week’s meeting to public comment, board Chairman Joe Turman said, “I will not condone any vulgarity, bashing or disrespect for the board or anyone involved. We’re all supposed to be friends and neighbors.”

back to top
Tweet
Let the people know the facts and the country will be safe.
Abraham Lincoln